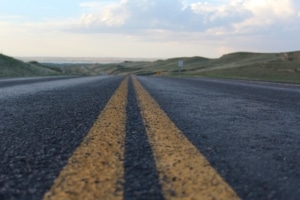 When Lee Gregory first started Sir Lines A Lot, it was as a part-time business.  He had a regular job and spent his nights drawing the lines in the parking lots of banks and fast food restaurants.  He had to stand out in a crowded field and did so with great customer service.  That meant when he started bidding for larger city and state contracts, he had developed a competitive advantage.  That advantage took him all the way to a ten figure exit.

Getting Creative with Capital Needs

You may not realize it, but one of those trucks that puts yellow and white lines down onto the road costs $700,000 new.  Lee didn’t have those kinds of funds, but he did have a crew that had some mechanical skills.  So he went around the country buying used trucks.  Most municipalities who owned them would normally sell them after 10-15 years.  Lee and his team put a lot of sweat into reconditioning these trucks and making them last longer.  Average cost of these used trucks?  $70,000.  With some elbow grease and creativity, Lee and the Sir Lines A Lot team essentially paid 10 cents on the dollar for these assets.  Cost of capital isn’t always a barrier, it turns out.

When Lee started bidding for jobs at the city and state level, he went from the dozens of competitors he faced when servicing small retail businesses to roughly three.  Lee always wanted to build his business with integrity so he wasn’t interested in backdoor deals with government officials.  He wanted to earn the business fair and square.  Turns out his competition wasn’t doing a good job, as simply showing up and doing what he said he was going to do on time earned him a great reputation among municipalities.

Once he had that reputation, he started suggesting to those who were in charge of putting together bids to consider putting stipulations into the bids.  These stipulations simply revolved around follow up and customer service that he knew he offered but that his competitors didn’t.  Those working in government saw those features as valuable additions for no additional price to the taxpayer, and soon Lee was winning some of those big jobs.

This didn’t guarantee he would always get the job: the law stipulated that the bid always had to be awarded to the least expensive bidder, and Lee recounts that he once lost a $4,000,000 job by $50.  “I’d rather lose a bid fair and square than cheat to win one,” he noted.

Due to the seasonal nature of the business, especially in Minnesota where the company was based, Lee (and his team) was able to count on 3-4 months off every year, and he was making a comfortable living, with the business throwing off between 20-40% margin of EBITDA.  But one day he was at a meeting with some colleagues in business and some basic questions led to a broker sharing the thought that Lee could be looking at a ten figure exit.

While Lee knew the assets of the business alone were worth $4-5M, he had no idea the business could command such a premium.  He had also started to realize the stress of running the company, particularly the HR issues which he didn’t care for.  Maybe it was time to look at a sale.

As he did, he realized that his value wasn’t in fire fighting and dealing with the HR issues, it was, as we often discuss in these case studies, removing himself from the scaffolding.  He worked hard to make the company an attractive turnkey asset to buy but still with plenty of growth upside.

As he prepared his business for sale, Lee realized that he had been lazy with books.  He didn’t actually know the average margin he made on any given job.  As he painstakingly went back through all the numbers and the cost of every can of paint, he realized that the work he was doing would not only offer potential buyers a much better look at the state of the company at present, but could also offer insight into growth opportunities that he hadn’t considered simply because he was comfortably cruising with the business as it was.  The marginal extra revenue in investing in a new truck here or a new process there wasn’t worth it to him, but it could easily be worth it to a new owner with fresh eyes and plenty of energy.

When his books were better Lee went back and engaged with the broker who had first shared the possibility of a big exit with him.  He ended up with four genuine offers and closed with the first one, though there were parts of the diligence that were challenging enough that he almost gave up.  But he saw his way to the finish line and the ten figure exit he was chasing.

Lee’s story offers some important lessons for those building a business to sell:

Have you been thinking about getting a valuation or selling your business?  Give us a call.  We’d love to help!

Best Practices for Marketing a Business for Sale
Scroll to top