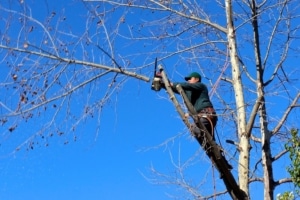 Bryan Clayton started building PeachTree, Inc. as a high school student. He eventually grew it to 150 employees and 8 figures in annual revenue. He spent his first years at college telling himself he didn’t want to cut grass for the rest of his life… as the income continued to roll in. Bryan realized that he would probably never earn as much in the job market as he was already doing in his business. When he graduated, he went all in on “cutting grass.”

Learn the Lay of the Land

Bryan really had no background for how to build a business and stayed curious about how to do things the right way. One of the things he did early on was visit large landscaping companies whenever he traveled for conferences. They often allowed tours of their facility on request, and Bryan used those tours as an opportunity to observe and take notes. What were they doing that he wasn’t? What systems did they have that he could put in place as well?

Residential income had been the startup engine of his business. As Bryan began chasing commercial accounts to diversify,  he learned that they paid on 90 day terms. This meant that signing a six figure contract to do work for an apartment complex or a set of bank branches required a certain amount of working capital. It was the only way to deal with such a long delay in payment. These kinds of lessons continued to shape how he built the company.

Once Bryan felt that he was executing the basics well, he developed a culture that differentiated him from his competitors in landscaping (of which there were many). He saw himself as a true partner with his clients. For example, many drive-thru restaurants often have cigarette butts in the drive-thru lane. They’re unsightly. When people lean out to order or to pick up their food, it’s unappetizing to say the least.

Bryan picked up on that situation and pointed this out to restaurants. He went on to pick up all those cigarette butts as part of his landscaping service. He (correctly) surmised that cleaner driveways might lead to better sales, and the restaurants noted this sort of care and thoughtfulness. The word spread.

Bryan also deployed the same thoughtfulness at apartment complexes. He asked where the model apartment was and what the standard closing rate was after a tour. His goal was to increase that closing rate by improving the appearance around the model apartment by adding touches of landscaping at no extra charge. Bryan wanted to drive home the point that he wasn’t just cutting grass, he was trying to make sure his clients did well financially.

As time went on and Bryan continued to grow his company, he came across books like Built to Sell and The Four Hour Work Week. He realized that while he had put some systems in place, he felt as if the entire company was just scaffolding that he’d built around himself. He was worried that his absence could cause the company to collapse. “I didn’t realize that the life of a business owner could be something other than rushing around all day putting fires out.” While he did manage to put some systems into place to make the company an attractive acquisition, he wasn’t able to hide the fact that he was “done” and didn’t really want to go back to running the business if a sale wasn’t completed.

His acquirer, a large operation who had done many acquisitions, could “smell” this fear on him, and that’s the first lesson Bryan would give to up and coming business owners:

Prepare for a sale when things are going well. This will take some time to put together, sometimes years, so don’t do it when you’ve run out of gas. Do it when you’re doing well, or your buyer might take advantage of your mindset of being “done.”

He adds, “Don’t get hung up on what YOU think the business is worth.” His acquirer was not interested in the 80 paid-for trucks that were part of his fleet (in fact, they sold them all the day after the sale closed and unsurprisingly, brought in their own equipment). The buyer was only interested in revenues and made an offer (which happened to be the best one) with no consideration for the equipment. It doesn’t matter what YOU think the business is worth. It matters what the market, and ultimately, the buyer who has done due diligence thinks.

It’s always possible to differentiate yourself, even in a red ocean like landscaping. Start with the basics of having the proper business systems in place. Then ensure that you have a culture that stands out… not just to your staff, but to your clients. Their delight and word of mouth will carry you the rest of the way.

We’ve represented buyers and sellers for landscaping and other outdoor businesses for decades.
If you have questions, give us a call.