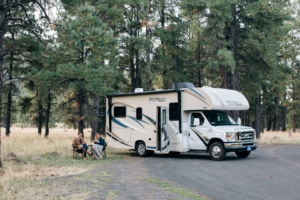 Anna Maste didn’t originally set out to build a business.  Her mom had already created some travel guides for the RV community that were selling well when a discussion between the two of them led to Anna pitching the idea of using that customer base to build a website.  Anna then spent a lot of her maternity leave (with free babysitting from mom) using her computer engineering background to create a basic website that allowed people who wanted to allow RVs to spend the night free on their property to advertise (and allowed those looking for free stays to connect with hosts).  Boondockers Welcome was born.  At first more of a monetized hobby than a business, the website took 7 years to grow to $100k in Annual Recurring Revenue (ARR) but thanks to an offer that made her reconsider everything, two years later Anna and her mom built the business up to $500k in ARR, leading to a healthy mid-seven figure exit.

Anna and her mom had been happy as 50/50 partners (despite the challenges that can exist in family businesses).  But at some point Anna’s mom wanted to enjoy her retirement a bit more, not just in less time spent on the business, but in a possible liquidity event that would allow her to splurge a bit more on some trips.

Anna used a broker to take the business to market informally and found an offer with a respectable 3.9X multiple on her ARR.  But at a conference where she shared the idea of an exit with some people, she found support and encouragement to build a bit more and get a bigger exit.  The big changes she made when she came back from the conference included:

The loyal following they already had kept spreading the word and unsurprisingly, the business grew.

The pandemic crippled many businesses, but not those catering to RVs.  Many people started to realize there were alternative ways to live, and not having a permanent residence was one of them.  While Anna maintains that the “lifespan” of an active RVer is roughly two years (after which they feel like they’ve “seen everything” and are ready to be off the road), there was a massive influx of people willing to try it, and the host community of former RVers only grew exponentially from these new inputs.

Anna looked at the remarkable growth over the two year period, powered by a pandemic but also by smart changes she and her mother made.  Two concerns plagued her:

The buyer who ended up acquiring Anna’s business was Harvest Hosts, which partnered with wineries to bring in extra income and awareness among the TRV community.  Anna was promised that her brand would stay separate but would be part of a community of brands that Harvest Hosts used to promote RV hospitality and partnerships.  She got her exit, only having to stay on as a consultant for six months.

Three lessons to take away from this story:

Are you looking at getting out of your business in a two year window?  Follow Anna’s lead and start planning now.  We can help.