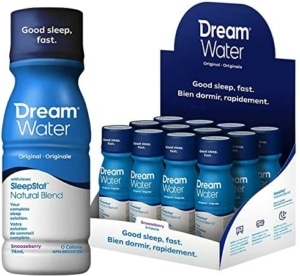 David Lekach knew when he started Dream Water that he wasn’t just building a product, he was building a category.  Thankfully, there was a preexisting product that had blazed a concept and delivery method that everyone understood: 5 Hour Energy’s little bottles were everywhere and people knew what they were used for.  Dream Water wasn’t going to give you more energy, in fact, it was going to help you go to bed, but it was in that same familiar 2 ounce bottle.

The story started with a friend who had developed a 1.0 iteration of what would become Dream Water and a small group of collaborators backed with funds from friends and family.  While the initial investment in Summer 2009 was just around $1,000,000, Dream Water would go on to raise a total of $6,000,000 as they ramped up sales and production: David and his family retained roughly 55% of the equity in the business.

While it was perfectly natural to get an energy shot at a gas station or convenience store, David figured that if people had trouble sleeping, they would probably go to a pharmacy, so he partnered with a famous New York pharmacy called Duane Reade.  The launch was only three months in when Walgreens announced an acquisition of Duane Reade, and now the team was faced with not just a local or regional rollout, but a possible nationwide rollout.

Interestingly, David figured early on that it wasn’t just about getting Dream Water placed in the right section of the “sleep aids” aisle in a pharmacy, but also about getting in the impulse areas, a place where 5 Hour Energy was dominant.  As he worked with various retailers, he would simply ask to have one of his boxes in the place of the fifth or sixth flavor of Five Hour Energy.  Those retailers gave Dream Water a shot and the sales validated the strategy.

David’s strategy of convincing retailers to allow the product to show in impulse areas worked consistently, and as such he used the small wins he had at various regions of Wal-Mart to give him a shot at national rollout in the impulse areas.  But unfortunately, Dream Water got placed at the very bottom of the rack (instead of at eye level) and didn’t get much traction, and once you’ve been pulled out of the impulse rack after a quarterly review, it’s very tough to get back in.  This caused a big drop in sales and demoralized David for a while.

But he didn’t feel sorry for himself for too long, because he got an unsolicited term sheet from his Canadian distributor.

The distributor in Canada wanted to get his COGS down so that he could scale the business but he couldn’t do so without some better deal, possibly a licensing arrangement, with Dream Water.  But the distributor leapfrogged a licensing deal and offered an acquisition instead.

It was late in the calendar year and David was really focused on growing the company and hadn’t even considered a sale, so he decided to have a very tight deadline in place when the Letter of Intent was signed on December 15th.  He told the distributor that he had 60 days to close the deal and he wanted $200,000 up front, in part to defray the accountants and lawyers he would need to hire help with diligence, but in part to move forward on a licensing deal if the sale couldn’t close.

February 15th arrived and the distributor called asking for more time.  David said that he was okay with the deal not happening and moving onto the licensing track.  The buyer did not want to go that way.  David demanded another $100,000 for a 30 day extension, and said he would charge that every 30 days.  This was not a deposit on a future sale, it was simply a “late fee” of sorts.  It’s an unusual tactic but the buyer accepted it and paid it, and paid it again when the next 30 days elapsed and the deal wasn’t done, and one more time at the beginning of May.  Part of the reason that the deal was taking longer was the fact that the distributor had brought in a much larger partner (a publicly-traded company, it turns out) to help fund the acquisition.

On May 3rd the buyer was required by law, since it was a publicly-traded entity in Canada, to publicly disclose any acquisitions a month before closing.  With the end of the deal finally in sight, David again charged his $100,000 “fee,” in part now because the buyer sold, among other things, cannabis, and he didn’t know how that would affect his relationships with the US retailers, including family-friendly Wal-Mart.  The acquisition could now have an adverse downstream effect.  But, despite those concerns, the sale closed, at $34.5M CAD (which was around $27M USD at the time) and thankfully, all the retailers stayed on.

As always with these case studies, we have a few takeaways:

Have you gotten an unsolicited offer for your business?  Don’t trust that you’ll be able to pull off the unusual feat that David did.  Instead call a broker.  We’ll help you navigate the situation.

Should You Use a PEO?
Scroll to top