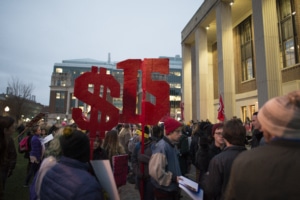 Fibonacci Blue from Minnesota, USA, CC BY 2.0, via Wikimedia Commons

A provision to gradually increase the federal minimum wage to $15/hour was recently removed from a budget reconciliation bill in Congress.  While that pay increase doesn’t look like it will be coming at the federal level this year, the debate around the topic isn’t going away and has already led companies like Amazon and Target to announce their own moves to at least $15/hour for all new employees.  In the same vein, the State of California has announced a state minimum wage of $15/hour effective January 2022.  Whatever the starting pay is for your employees, you should know and understand the talking points of this debate.

As part of the legislative process, the Congressional Budget Office (CBO) put out some projections on the effect of the move toward $15/hour:

While the CBO is a nonpartisan body, that doesn’t shield them from criticism, and these numbers received their fair share of disagreement from both sides of the aisle.  What is clear already is that more than 29 states have minimum wages that are higher than the federal minimum wage, which was last adjusted in 2009 to $7.25/hour.

We’ve talked before about different ways to financially reward employees and why hiring for cultural fit is an important part of making sure that your team isn’t only money motivated.  While not every business has the resources to simply double starting pay, and while the vast majority of our clients don’t have a single team member on minimum wage, it’s important to realize that such a dramatic change will affect everyone and every business.  Questions you should be asking include:

Sometimes we can forget that changes we don’t think will affect us or our businesses will indeed affect us and our businesses, and in profound ways.  Rather than passively wait for changes to occur, the best business owners proactively attack challenges before they become problems.

Are you and your team happy with the compensation plan you have in place?  Have you thought about that plan in relation to a possible future sale?  Give us a call to talk about it.