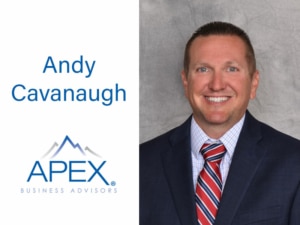 Andy Cavanaugh has had a taste for running his own businesses since his teenage years, when he was mowing yards for cash.  He wasn’t certain that was going to be his career path, however, and after an undergraduate degree in business and an MBA from UMKC he took the corporate path for a while.  But that life never really took with him, especially when trips took him away from his wife and two daughters and even more so when he was told he might need to be on the lookout for an email on a weekend evening, and possibly respond right away.

He diversified into doing some tech development, consulting, and even running restaurants.  His last business was a franchise that he sold after running it for ten years.  He wasn’t thrilled with the franchisor and felt it was time to move on.  The level the business was at wasn’t a good fit for us here at Apex so Andy ended up selling it himself, learning a new the lessons we see every day here as brokers.

He had three buyers look at the business and had takeaways from the first two that backed out that helped him get to the finish line with the final buyer:

Andy sold the business this year, which means that he experienced what many business owners could never have foreseen: months of operating during Covid-19.  That experience taught him a lot, but now that he’s a broker he has a new respect for small business owners who toughed it out and made it work through an end-times scenario.

Having been a business owner also means he can have a frank conversation about best business practices.  When he was looking over some owner benefit items from a potential client recently he got curious about a one-time $7,000 charge for “building enhancements.”  The seller said those were for his wife’s cosmetic surgery.  While this might qualify as an “enhancement” it certainly wasn’t on the building and isn’t anything a buyer wants to see.

Having been the less seasoned business owner who ran too many personal expenses through the business in his early days, Andy told him that what’s done is done, as those charges were from 2019, but that the cleaner the books are, the better price a business will fetch (and the sooner it will sell).

Recently Andy also had an interesting conversation with a seller who wanted to know why Andy wasn’t pursuing things with a certain buyer.  “She doesn’t like the way your building faces, so we need to move on.”  The seller was upset and took Andy to task for not “selling his business.”  After hearing him out, Andy asked if the seller was willing to turn the building so that it faced South instead of West (what the buyer was interested in).  The seller started to realize Andy’s point and replied, “No.”  Andy pointed out that there are dozens of potential buyers who are fine with the current building’s orientation and those are the people we need to focus on, not the people who have problems with the business that cannot be fixed.

When he’s not spending more time with his family to make up for all that travel in his consulting days, Andy can be spotted, like many of us, at Chiefs and Royals games.

Case Study #57: Built to Sell from the Start