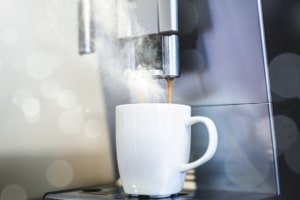 Things were looking bright for Calvin Johnson and his single-source office supply business Lykki in early 2020.  While he provided traditional office supplies, the fastest growing part of his business was in office coffee: he had even started roasting his own beans to keep up with demand (and maximize profits).  At the end of 2019 he signed a contract with 50 banks, which meant buying a bunch of equipment to put into those banks.  Then March 2020 happened.  This is the story of how Calvin salvaged his 23 years of hard work and pulled off a sale in one of the most challenging times for businesses like his.

Small businesses often don’t realize that buying office supplies from one vendor, kitchen supplies from another, and coffee from yet another one isn’t just a poor use of time, isn’t just more labor for the accounting department, it’s often more expensive.  Lykki was able to save its customers time and money and make accounting’s job simple.

This was something they also believed as a company, as “creating happier workplaces” was a part of their mission.  While they had started in the office supply business first, they naturally grew into helping their customers with everything else they might need, from water, to coffee, to food.

A Tale of Two Businesses

Even though Lykki made ordering simple and seamless for their customers, the two divisions of the company couldn’t have been more different.

The office supplies business represented 20-30% of their topline revenue, yielded a steady margin in the high 20s, and offered 30,000 SKUs using just-in-time logistics, meaning, no inventory.

The rapidly growing food and kitchen supplies business represented 70-80% of their topline revenue.  This required a warehouse for food that needed to be tracked towards expiry and, as we mentioned already, even featured their own coffee roasting, allowing them to take advantage of integration and make even greater margins.  On this side of the business blended margins were in the 40s.

Calvin had his 50th birthday and reflected on where he was in his life and felt that it was time for a new chapter in his life, but having consulted with friends and mentors, the $7-8M in topline that Lykki was doing wasn’t going to attract the big national players that could give him a valuation he wanted.  He would need to drive it to $10-20M to do that.

While he obviously pushed his team to grab some of that necessary growth via sales, he also tried the acquisition route and found that people weren’t interested in selling.  Turns out that a lot of small office coffee business suppliers were running nice little lifestyle businesses and weren’t interested in giving those up, thank you very much.  So, at least for the moment, acquiring his way to that revenue wasn’t going to happen either.

Prepare For a Sale

So, while he let his team push growth and accepted that the market wasn’t ripe for a roll-up, he got to work doing what he needed to for a future sale:

As many other business owners did in March 2020, Calvin felt like he was in a bad dream.  Customers told him that they were closing offices and might revisit that decision “in January.”  Sales dropped by 85%.  As for that coffee deal he had just signed with the bank, the business model for office coffee always implied free usage of the equipment, assuming a certain minimum order.  But with no in-office workers, many businesses simply told him he could “pick up his machines.”  He did.

While the Canadian government helped Calvin and his employees survive most of 2020, via 70% subsidies of his rent and 75% subsidies of his employees’ pay, when January 2021 rolled around those programs started to expire and many customers were not coming back.  He realized his options included bankruptcy or selling.  He looked at bankruptcy and saw that it could be expensive and complicated too, so he just decided to throw himself into a sale, realizing that it would be smart to split the company in two.

Through his network he found out that a certain company had a war chest and was making acquisitions in his space and he gave them a call.  The potential buyer was willing to hear him out.  Calvin reasoned that at some point the numbers would come back (he was roughly at 50% of his former level of business) so rather than look at the growth curve pre-pandemic, he simply looked at the historical numbers from 2018 and 2019, reasoning that at some point at least those levels would return.  The buyer agreed and accepted the price Calvin offered with no counter.

The office supplies business was harder to move, but Calvin did manage to land a deal that was 50% upfront and a 50% earnout (an earnout he is currently in the middle of).  In both sales the buyers wanted an asset sale instead of a share sale, which left Calvin to figure out different tax-advantaged ways to get the money out of the company.  But that’s the sort of problem he was happy to have.

You can’t help but admire Calvin, who managed to pull off not just one, but two sales, when he could just have easily had none and faced bankruptcy.  Three key lessons:

Are you considering buying or selling a distressed business?  We can help!  Give us a call.