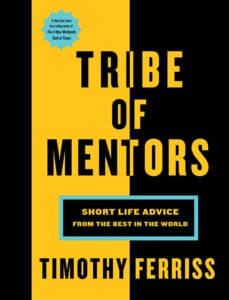 Tim Ferriss is most known for his bestselling The Four Hour Work Week, but most recently has been compiling books that have been enabled by his top-rated podcast. The newest one is Tribe of Mentors, which has the subtitle of “Short Life Advice from the Best in the World.” At almost 600 pages, the book is not meant to be read straight through, but in 4-5 page increments as you peruse the answers to a set of questions Tim posed to one hundred different high achievers.

Not every person answers every question listed below, and some bend and re-frame the question to go down a more interesting path, but to give you a frame of reference, here they are:

We obviously can’t go through all the many answers that were given in the book, but here are a few.

On Advice to Recent Grads

Developer of “smart contracts” and the precursor to Bitcoin, Bit Gold, Nick Szabo offers the following: “The less you need positive feedback on your ideas, the more original design regions you can explore, and the more creative and, in the long term, useful to society you will be.” Unlike the “plastics!” advice of previous generations, this challenges those coming up in society to be willing to take more risks.

Ben Silbermann, CEO and co-founder of Pinterest, adds: “I feel like a lot of people in Silicon Valley serialize their lives. They think, ‘First I’ll do college. Then I’ll do a startup. Then I’ll make money. Then I’ll do X.’ There’s some truth in that approach, but most of the most important stuff has to be parallel-processed, like your relationships and your health, because you can’t make up the time by doing more of it later. You can’t neglect your wife for four years and then say, ‘Okay, now it’s my wife years.’

Relationships don’t work that way, and neither does your health or your fitness…Figuring out a system, so that the stuff you need to do all the time happens, even while you might be placing disproportionate focus on one thing, is pretty important. Otherwise, you’ll be setting yourself up to be lonely and unhealthy in your future.”

Arianna Huffington became more intentional with her time: “Before, I separated time into work time and non-work time, and I always wanted to maximize work time. Now I realize that you can’t separate the two — time spent taking breaks, taking a walk, unplugging, meditating — that’s all work time, too, in the sense that time spent unplugging and recharging makes me better, more effective, and happier in my work and in my life.”

Josh Waitzkin, a chess prodigy whose life was the basis for the film Searching for Bobby Fischer, has an extreme take on saying “no” more often: “I say no to just about everything public. I say no to more than 99 percent of professional opportunities that people approach me with.” This is echoed by tech founder Muneeb Ali later in the book: “External meetings should be initiated by me…and not initiated by others.” Now, not all of us are as busy as these people might be, but surely we could audit how and where we are spending our time to be of greater personal benefit to ourselves and those we love.

Maria Sharapova shared a quote of Hal Boyle’s to help her when she’s feeling lost or unfocused: “What makes a river so restful to people is that it doesn’t have any doubt – it is sure to get where it is going, and it doesn’t want to go anywhere else.”

Of course there are literally hundreds more answers in the book, and if you’d like to listen to some of them free, you can check some of them out in the short audio series Tim released just for the book.

In the meantime, it might be a fun exercise to do these questions yourself and share them with your friends and colleagues.  You’ll learn plenty about yourself and them in doing so.

Business in 2020: Catching a Falling Knife
Scroll to top