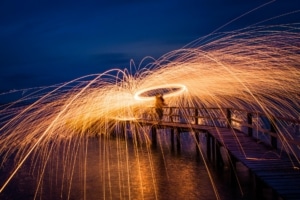 You may have heard about NFTs in the news at some point in the past year.  These digital assets are in their first era of growth and exposure and big brands like Nike, Gucci, and Sotheby’s are jumping in on the fray.  We thought it would be worthwhile to give our readers a simple explanation of what NFTs are and how brands and businesses are taking advantage of them.

NFT stands for non-fungible token.  Money, being interchangeable and indistinguishable, is an example of a fungible asset.  Your house or the Mona Lisa, for example, are unique and irreplaceable, making them non-fungible.

What Can Be an NFT?

Pretty much anything can be an NFT.  Let’s start in the physical world with the Mona Lisa, which we mentioned already.  While it’s true that you can go to see the Mona Lisa in Paris at the Louvre, you can also see it on your phone.  You can print it out, frame it, and put it on your wall.  You can make it the desktop wallpaper of your computer.  But you’ll never own it.

The Mona Lisa has value because we as a society have assigned it value and because most of us in the world live in economic systems in which the owners of private property can sell items of value that they own.  But since the Mona Lisa might be too extreme of an example, think of baseball cards.

Baseball cards are made of cardboard.  They were printed by computers, not designed by a famous Renaissance artist.  They are not inherently useful.  Yet our society still assigns them value, and they change hands to the tune of millions of dollars per year (if not more).

NFTs take these physical-world principles and put them into the digital space.  Think of them as digital certificates of authenticity which show the chain of custody all the way from the original creation of it on the blockchain (known as “minting”) all the way through every buyer until it’s ended up in your hands.

Yeah, okay, but who would do this, and what would it be for, you might ask.  Great question.  Some recent examples include:

Examples of NFT Use Cases

But NFTs aren’t just for global megastars and sports leagues, they can be created, bought, traded, and sold by anyone.  Foundation and OpenSea are examples of large marketplaces where NFTs are minted and sold everyday.  A fancy digital iteration that doesn’t exist in traditional art?  You can create a setting when minting an NFT that triggers secondary revenues to the original minter of the NFT everytime the NFT changes hands.

Band Kings of Leon included software in an album they released as an NFT which allows the current holder four front row seats to every tour for life.

Nike recently filed a patent to allow for blockchain authentication of ownership of physical sneakers.

Perhaps the most fun and interesting use case of NFTs currently is in the Zed.run virtual horse racing marketplace.  You can buy virtual horses as NFTs and then run them (and win crypto) in various races which are running 24/7.  Seriously.

While some might throw up their hands and say they simply don’t understand, there are lessons to be learned (and money to be made) even during bubbles.  It’s too early to tell whether NFTs are a long-term trend or just a modern day version of Dutch tulips.

What’s clear is at the moment NFTs can be created, made scarce, bought, sold, and even serve as a source of residual income.  That makes them just like many other collectible objects which you may not care about or even understand the market for.  But hopefully after reading this you understand NFTs better, even if you have no desire to ever own one.

We don’t have any NFTs for sale here at Apex, but we have plenty of businesses that will be great assets for years to come.  Give us a call if you’d like to check a few out.

Why Your Business Should Consider an Email Newsletter