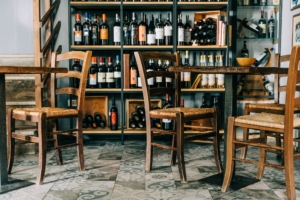 Running a wine bar may sound like an amazing lifestyle business, but like any business, one day may be the right one to move on to other things. That happened around the 50th birthday of one of the owners of The Art of Wine in Sedona, Arizona and the sale of the business offers some helpful lessons for buyers and sellers.

So few business owners will tell you that they knew they wanted to own such-a-such business “when they grew up.” So often winding career paths make them experts in fields they might not know existed before landing on something they loved, were passionate about, or were really good at.

Laura Gisborne, one of the owners of The Art of Wine, took one of these paths. She married into a family business in her early twenties, exited after a period of time with her husband and got into real estate, which exposed them to retail businesses, which they also ventured into. During this time they moved to Sedona, Arizona, where they decided to open a wine bar to cater to the 3-4 million annual tourists that Sedona sees.

This would be the 9th business that Laura was involved with.

The business took off and before too long they had added a wine subscription business to their events and tastings. They shipped a box once a quarter and made an effort to curate the box around the tasting preferences of subscribers instead of just using it as a place to dump overstock or clearance inventory.

The quarterly shipments depended on a year-long original commitment, after which time they often saw churn around 30%, but since they had a solid stream of new subscribers through their retail location, that core continued to build up.

Laura’s first job was at McDonald’s and she very much took to heart the lesson of creating written manuals that would enable people of high school age and intelligence to run key business functions. While high schoolers obviously couldn’t help with a wine bar, she kept the same principles in place and advocates for every single role in a business to be clearly articulated in written form. It’s short-term “pain” with lasting value.

She believes that everyone in the business has to be replaceable, not just for running a business, but for eventually selling it, something she always considers when creating a new venture.

Often the end can come suddenly. A business owner can wake up one day and realize he/she is mentally done and needs to sell. Less ideally, people can go through a personal crisis and be forced to sell. In this particular case it was more of the former: Laura’s husband hit his 50th birthday and realized he didn’t want to work at a wine bar anymore, even at the 15-20 hours a week he was working.

For her part, Laura had started to get more speaking requests around entrepreneurship and leadership and realized she would like an exit that would allow her to pursue that as well.

After experience selling more than half a dozen businesses, they opted to list the business on BizBuySell and had three different serious interactions in which she required not just an NDA but the unusual additional requirement of a noncompete, as the market in Sedona had significantly changed since they were the first mover in the space back in 2005.

One of the potential buyers made it far enough into the process for a site visit, and Laura and her husband discovered that there was a lifestyle motivation as well: the couple looking to purchase lived in Washington State, with hundreds of rain days a year, and were looking to move to sunny Arizona anyway.

The Art of Wine had been sliced up into different business lines, primarily to give Laura a bit of negotiating. She knew the inventory would be worthless to them once they sold, so she held it as a bargaining chip should they need to push the deal over the line (they could “throw in” the inventory).

However, they discovered that the nonexistent regulation when the company was started in 2005 had developed at the same pace as the burgeoning Arizona wine industry. That meant the new owners would need a liquor license, something Laura and her husband never needed because they were grandfathered in.

That meant telling the buyers that they needed to spend $20k to acquire a license before the sale closed. For their part, Laura and her husband simply deducted that $20,000 from the selling price to make sure they were offering a like-for-like scenario: the business would have been on a completely different footing if they couldn’t serve wine at events.

Thankfully all went well and The Art of Wine was successfully handed off to new owners grateful to change their climate in addition to their income stream.

As always, there are lots of lessons here, but we will focus on three:

Want to buy a wine bar or some other hospitality business? We’ve got options for you. Call us!

Episode 35 – Tips for Telling Employees after Close
Scroll to top