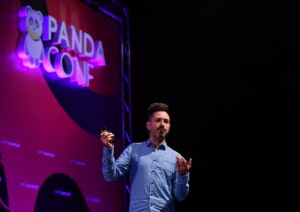 Rand Fishkin started an SEO blog in 2003.  His work became so popular that he was asked to speak and consult and before too long he realized there was a business to be had and by 2006 Moz was up and running.  He then went on a venture-backed journey that led to some great highs for his team, but many missed opportunities and mistakes as well.  Rand’s book Lost and Founder captures much of what went right and wrong during his Moz journey.

Rand dropped out of college to help his mother with the digital size of her marketing business.  Despite helping their customers, they managed to get into sizable debt which only got taken care of as Moz, a totally separate venture, took off.

To deliver important SEO data to its customers, Moz had created internal software.  As Rand made his way around the speaking circuit people kept asking about it and he decided to make it available to the public for a recurring monthly fee: $39.99.  After six months that revenue stream alone was worth the same amount to the company as the consulting.  The Moz team realized the future was in software and pivoted accordingly.

That’s also when VCs came calling and one particular group funded Moz to build a new version of the software that would reintroduce some key data that used to be publicly available for free from Google, but which the search engine had removed for various reasons.

While the new software launched in October 2008, around when Bear Stearns blew up, before too long the new version of Moz was doing very well, leading to 100% growth year on year for several years.

Rand went on to pitch 150 firms, almost all of whom said no, but one invested $18M, which ended up being a mistake, Rand claims.

This is due in part to the mystique around venture capital, in part driven by the Shark Tank phenomenon.  Rand asserts that 99% of companies should not take VC money.  His own large VC cash infusion led Moz to take their eyes off the SEO ball and chase down other shiny objects.  From 2012-2014 as they spent this cash infusion their market share of the SEO software market was ceded to their competitors.  Instead of the 60-70% of the market they had in 2012, seven years later, they had around 14%.

Still, at the time, Moz was an attractive proposition for a company looking to make a strategic acquisition, and Hubspot was just such a company.  They offered Moz 5X their revenue, which at the time was a $25M cash and stock offer.

However, Rand was confident in Moz’s growth curve and countered with 4X what he projected next year’s revenue to be, $40M.  Hubspot refused and a few years later, they went public.  Rand estimates that the $25M could then easily have been worth $200M, to say nothing of what he and his team could have learned working with a brand like Hubspot for a few years after the first exit.

The Gift of Humility

Rand has recently left Moz and has gone on to found SparkToro, which is aiming to be a search engine for audience intelligence, helping businesses find the best places for them to be in front of their clients. Apart from collecting the lessons of the journey in the book we mentioned above, he says his biggest gift from this missed opportunity was the gift of humility, something he thinks all founders need a good dose of, whether they want it or not!

Rand didn’t lose his shirt and did eventually profitably exit the company he founded, but his story offers so many lessons.  Let’s focus on three:

Worried you’ll miss a good offer when it comes your way?  That’s what a solid business advisor is there to help you navigate. Put one of us on your team.