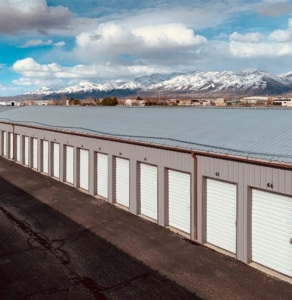 In 2011 Nick Huber was a junior at Cornell University.  He was one of the captains of the track team and ended up becoming an All-American in the decathlon.  But the summer after his junior year, he was just trying to offset some of his expenses.  He had overlapping leases on his apartments and since he planned to be out of Ithaca during the summer, he hoped to sublease at least one of the rooms in those properties.

Unfortunately, no one bit on a sublease but one parent called and asked if Nick would be willing to take $150 to store some of his son’s stuff over the summer.  After picking those items up, Nick realized he would need to get a lot more “customers” in order to help cover these leases.  He got email lists, made flyers, contacted fraternities and sororities, and even wrote in chalk on the ground.  He managed to fill up a couple rooms and the following year he brought on one of his fellow student athletes, Dan, as a business partner.  That partner happened to have a house with a basement and they filled up all the rooms and the basement and when all was said and done they had about $8000 for a few weeks of work.  Storage Squad was born.

Parents who send their kids to Ivy League schools, like Cornell, expect Ivy League outcomes, which is not usually expressed as, “Dad, I want to start a business of moving boxes around twice a year.”  But thankfully Nick’s father didn’t oppose Nick’s desire to build a business and was willing to let it play out.  Nick and Dan ended up buying a couple of cargo vans and expanding into other states.  In 2012 they did $300k in topline revenue, followed by $750k in 2013.  In 2014 they did $2.2M in topline revenue and had tripled their profitability.

But given that Nick and Dan had started this business while they were still in college, they had no “experience” from either running a business or from working in corporate America.  They learned the way many entrepreneurs do: taking risks and making mistakes.

One thing they learned early on was that their business did really well with small prestigious schools that had a lot of out-of-town and international students.  The big state schools had 80% of their student population from in-state, so they could just as easily have family come haul that stuff home at the end of a semester.

They also found that employees really did well with structure rather than autonomy.  When they first started the business, their drivers were their main employees and had 28 different tasks they had to complete, including billing the clients!  Obviously it made more sense to systematize and specialize and before too long drivers only had 5 tasks, not 28.  They had a card with contact information to give to clients if there were any billing or customer service questions and those drivers could say, “I’m just here to pick this up for you and bring it back to the warehouse.”

Storage Squad was a seasonal business.  This was great for two reasons:

It was during those down times that Nick and Dan were able to reflect on how they were running their business and what was next.  What seemed a natural fit was real estate.

Because they had spent so much time and energy leasing storage spaces to house their clients’ goods (they weren’t using basements anymore!) they realized that there was a future in building a separate real estate business that specialized in storage facilities.  In 2016 they built their first storage facility from the ground up.  After they felt comfortable with how that was running, they got outside investment and acquired many others.  At the time of this article they have 24 facilities spanning 500,000 square feet under management.

They knew their future was in this real estate business, and Nick was managing that full-time while Dan was running the Storage Squad business, and in late 2019 they had put a lot of changes in place that made them feel 2020 was going to be their best year ever, after which, they could put the business on the market.

In March 2020 many schools sent their students home for the semester.  Storage Squad was in the midst of its regular build-up to May in which they went from their 6 full-time employees to an additional 300 seasonal workers.  But some schools had sent their students on Spring Break and told them not to come back.  Nick and Dan got on the phones with these universities looking to come up with a solution for all the students’ stuff in the dorms.  The hustle paid off and their workers used FaceTime and other technologies to work with the students to pack their stuff remotely.

Storage Squad ended up having their best year ever due to this hustle, but also because they got large institutional checks from the schools, as opposed to the smaller transactions they had with the students, which always came with the 3% credit card fees (Storage Squad had never accepted cash or checks from day 1, keeping that part of their bookkeeping very simple).

While they had wanted 2X EBITDA originally, because they had such a great year AND because it was clearly a one-off type of year, the acquirer, 1-800-PACK-RAT, ended up offering them 1X.  They came back to them in late 2020 after having had conversations with them in late 2019.  The deal was fairly straightforward and closed in 45 days.

There are some wonderful lessons that Nick (who’s very active on Twitter) shared about this acquisition:

Are you interested in buying a “boring” profitable business or in selling one of your own?  We know just how to help!  Give us a call.

Should You Have Business Interruption Insurance?
Scroll to top