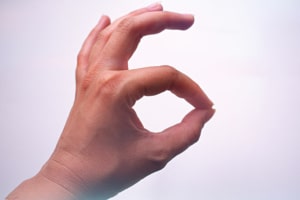 David Jondreau grew up watching his father teach Sign Language classes in their family living room. No one in the Jondreau household was deaf, but David’s father had befriended members of that community and became passionate about teaching ASL. Before too long a legitimate small business sprang up that was part of the highly fragmented industry that was (and is) language interpretation services. If you needed sign language services for government meetings and speeches, or hospitals, or education, the Jondreaus’ American Sign Language was there to help.

A couple decades ago, when most people had no idea what “remote work” was, David began helping his father two time zones away. The business was in NYC but David lived in New Mexico. He helped with administrative tasks and booking classes. But one day David’s father passed away suddenly, and he and his sister inherited the business.

While David was grieving, he also knew his father would want the business to keep going, so he started to put together the pieces of a real, sustainable business. His father was a selling dynamo and also ran the business completely out of his head. David had to learn sales as well as create written processes where none had previously existed.

In a nod to keeping the business in the family, David asked his mom to join as a 2% owner. With David and his sister at 49% each, it meant any big decision where there was disagreement needed to involve his mom. But this also meant the business qualified as “female owned” which really helped with some government contracts that listed that attribute as preferential.

All small businesses are challenging in their own way, but of particular stress to David over the years was the renewal of contracts. Not getting a contract renewed could massively affect the outlook for the coming fiscal year, and when David lost a game-changing sized bid for a large New York City school system, he had decided that it might be time to investigate a sale.

Thankfully, he had always beyond clean books: they were audited. He had taken the time to put key people in place, and he had refined the systems he first started putting in place when he read The E-Myth in the early years of the business. He started poking around at large regional conferences of language providers for possible buyers before deciding to hire a broker.

One of the possible buyers the broker introduced was building a conglomerate for a family office. David’s business would add a sign language component to a few other small businesses that would roll up into one entity. David was enjoying 10% margin on $2M of revenue and was looking for 3.5 times seller discretionary earnings (SDE).

When David chatted with the buyer he felt instant rapport and connection and felt comfortable moving forward once the price had been agreed to. Due diligence began and they were roughly two weeks away from closing on the sale.

The contract that David thought he had lost? Hard to believe, but the government had messed up the paperwork and David had actually won that five-year, multi-million dollar contract! Worse, the client demanded that the services start being delivered within a few days, which was when the school year was scheduled to begin. David leaned on that good relationship he had with the buyer and let him know about the development and asked for two weeks to completely focus on fulfilling the contract, after which time he would come back to work on the deal. That good relationship turned out to be rock solid and David was given that time to put everything in place.

But that meant that two weeks later, the value of the business had effectively doubled. What had originally been an 85% cash/15% paid in a one-year note couldn’t work anymore, especially since David would need to help babysit and optimize delivery in the early years of the contract. An earnout was put into place to account for the new revenue.

Unsurprisingly, the school system couldn’t seem to get their act together on paperwork and it was seven months before the first payment on the contract arrived. In the meantime, David maxed out all his personal and business credit and had even gotten some bridge financing from the buyer (again, see the power of openness and transparency in a transaction?). But as the payments started to be made regularly, the deal closed, and David stayed on for a period of transition, then as a consultant for the large contract.

David’s story is filled with key lessons for those who want to sell their business, even if they don’t work with family:

All we do all day is help buyers and sellers come together and get to a mutually satisfactory outcome.  Let us help you!

Buying Distressed Businesses During the Covid Crisis
Scroll to top