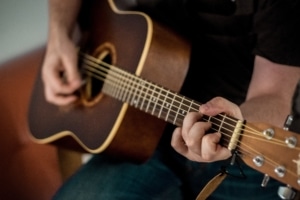 For some years, Marc-Andre Seguin was the typical struggling artist, specifically, of the musical variety. But unwilling to face the fate of so many before him, he decided to create a blog about his music, and almost a decade later, that site pulls in a cool $250,000 a year in revenues. How did he get there and where is headed? Let’s take a closer look!

Marc-Andre first started by simply providing some content about jazz guitar pieces and improvisation. He would link to Google Adsense and Amazon Affiliates, earning revenues from the growing number of visitors to his blog. Some of these clicks would earn him 15 cents, others 30 cents. He also began to charge for PDF versions that could be downloaded and also allowed people to book private lessons with him via Skype. These strategies got him from the early months of $30/month in revenue to $700-800/month.

One of Marc-Andre’s students happened to be experienced in email marketing and convinced him to start creating infoproducts, be they e-books or private “classes” that could be sold via email marketing. This was also a success, and started to bring in significant revenues, but that also meant time putting together an infoproduct for each email launch as well as the right combination of marketing and wording to make the offer compelling. Revenues were now into four figures a month for Marc-Andre, but he grew tired of having to come up with each new promotion for the email push, and decided to take a look at another model…

While there is a universe of “guitar lessons” available on the Internet, Marc-Andre discovered that he was part of a very small cadre offering anything relating to jazz guitar, and so he decided to pursue that niche with all of his focus. But instead of the overwhelming all you can eat Netflix model, he offered something more course-oriented. He created a “start here” engine that guided people through the lessons, starting at whatever level they were comfortable at (and eliminating those who were too advanced for what he was offering). Then, as more and more content was being created, the users would then be an infinite loop of learning.

His current churn rate is around 10%, which is standard for an infoproduct business. As of late 2019, Marc-Andre’s jazzguitarlessons.net brings in roughly $20k/month.